Diurnal variations of upper tropospheric humidity in five different reanalysis datasets are compared over convective land and ocean regions, and evaluated using multiple satellite observations as a reference. All reanalysis datasets reproduce the day/night contrast of upper tropospheric humidity and the land/ocean contrast in the diurnal amplitude. The infrared satellite measurements indicate a slightly later diurnal minimum over land relative to most reanalyses and the microwave satellite measurements, suggesting that cloud masking of the infrared radiances may introduce a small (~ 3 hr) bias in the phase. One reanalysis exhibits a substantially different diurnal cycle over land which is inconsistent with both infrared and microwave satellite measurements and other reanalysis products. This product also exhibits a different covariance between vertical velocity, cloud water and humidity than other reanalyses, suggesting that the phase bias is related to deficiencies in the parameterization of moist convective processes. 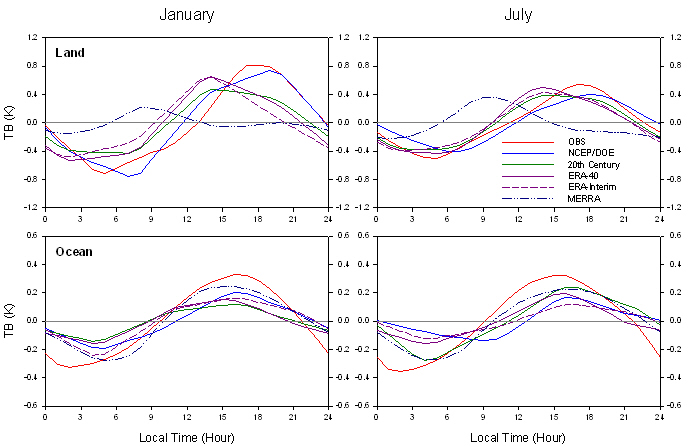