In Part I of this ongoing series ( see 'Wondering why abrupt  PNA shift evident in the Leathers and Palecki (1992)  PNA is not apparent  in semi-current (as of Oct 2009) NCEP NCAR reanalysis data (Part I)') my collaborator and I were trying to figure out why an abrupt shift in the PNA index in ~1957  pointed out by Leathers and Palecki (1992) (hereafter LP92) using older NMC reanalysis data was not found in more recent NCEP-NCAR reanalysis data. The main reason for this is that an abrupt drop in 700 mb Z over the southeastern U.S. (SEUS) that drove that PNA shift was evident in the NMC analysis, but not the NCEP-NCAR analysis. (see  LP92's Fig1d and our Fig. 3d in Part I). To look at this more closely we decided to compare IGRA radiosonde variability  (  http://www.ncdc.noaa.gov/oa/climate/igra/&nbsp;   ; Durre et al. 2006)  for a number of SEUS stations during 1951-1965 with  NCEP-NCAR 700 Z series at nearby grid locations.

LP92 had looked at 700 mb Z variability derived from sonde data form New Orleans, Miami, and Charleston SC in their paper (see Fig 1b below), so we downloaded those station's data and data from a number of other SEUS stations. We averaged the IGRA daily data into monthly values, and subjected the monthly 700 mb Z from the IGRA and NCEP data to the same 13 month running average  used in LP92. Comparing Fig1a below with Fig1b below shows that our Z series and their Z series for New Orleans, Miami, and Charleston are nearly identical. But while there is a downward shift in 700 mb Z after 1957 that LP92  show as a shift to below mean values in Fig 1b, that same shift is not evident in the NCEP Z series at nearby grid locations in Fig 1d,e, and f. For example, the NCEP Z series in Fig 1d has an upward trend after 1957, while the Miami sonde data in Fig 1 has a downward trend.

The differences between the sonde records for Brownsville TX and Nashville TN (Fig. 1c) and Z variation at the corresponding  NCEP grid locations (Fig. 1g,h) are more obvious. Both of the sonde records show a clear regime shift to lower Z values after 1957 that is absent in the reaanalysis Z traces. Otherwise, the IGRA and NCEP trace are similar. For example,  if you closely compare the IGRA Brownsville Z trace in Fig. 1c with the Fig. 1g NCEP Brownsville trace  you see they closely similar, but that the NCEP values after 1957 are translated upwards. A similar translation also seems evident in the New Orleans, Miami, and Charleston NCEP Z traces (Fig. 1 d,e,f) , but is particularly clear in the Nashville IGRA and NCEP Z series (Fig 1c, Fig 1h).

It seems - and this is just a guess on our part - that  NCEP Z values in the southeast US may have been nudged toward climatology after 1957. But this adjustment does not seem consistent with the downward trends and shifts in Z after 1957 in the sonde data. On the other hand, this shift is evident in the older NMC analyses (See LP92's  Fig 1d in Part I). 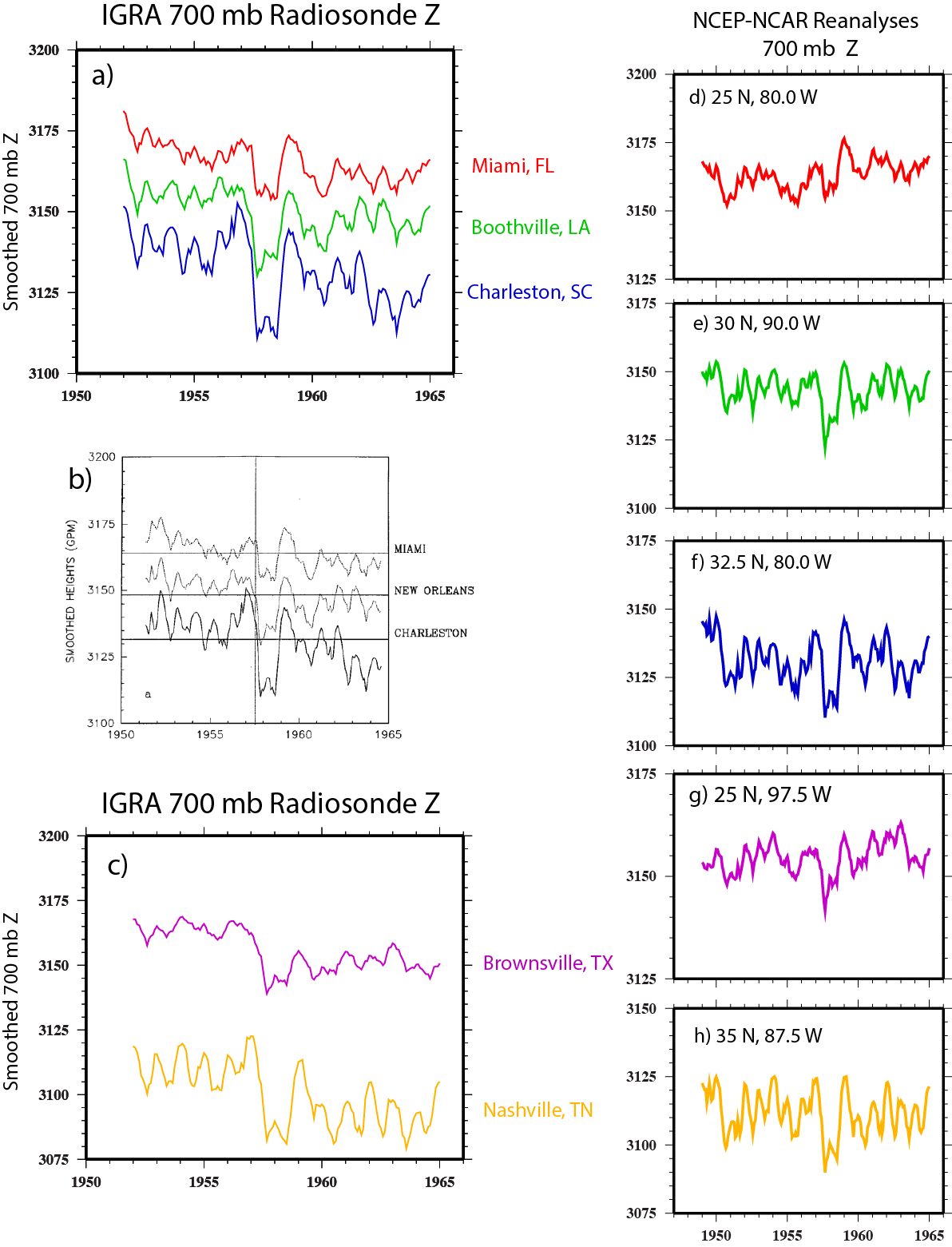